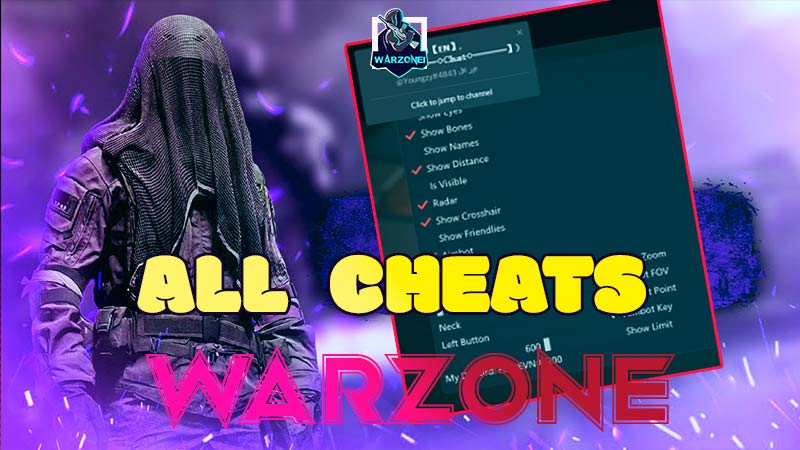 Now Warzone is in terrible condition, and hackers keep annoying players. All of us are now used to facing cheaters and hackers, spend time reporting them, and start a new match. But then still in the next match also we should deal with hackers.

So many players could not bear it and turn their faces away from the Warzone. But Raven probably considered this god damn condition, and rumors heard about a Strengthen in the anti-cheat system.

This condition is terrible enough to some players guess even though reporting a cheater, nothing wouldn’t happen, and still, he remains to annoying others. The game publisher should immediately fix this Mess before this widespread game loses its importance and becomes an abandoned game with empty servers.

In this article, we prepared every critical point and fresh news about Warzone cheaters; stay with us.

this cheat will automatically put your aim on the enemy’s head or every other part you select. With no butter, it locks on enemies one by one even if there is more than a squad there .its one of the commonest cheat among players. So many cheaters using this.

it’s the next most common cheat in Verdansk. Do you notice that some players know where you are precisely, and they waiting for you to coming out of the covers? Or does it happen for you that despite you getting closer to the enemy with a Dead silence but he waiting for you and is ready to take you down? This cheat is the Wallhack. They can see the other players through walls, and there is no object to hide you from their cheat. Where you going, they exactly know.

Best Loadouts to return in Warzone 2?!

ESP(Extra Sensory Perception) works like the Wallhack cheat, but it is more expensive and has more features than a regular Wallhack. It would make the cheater able to see the player’s name, health, where they looking and etc. it also helps you find valuable things like legendary chests!

this one shows the enemy’s place on your map, everyone. It doesn’t matter you using ghost perk or whatever; this cheat clearly marks all enemies ‘ places.

old days, console player for getting ride of cheats and hackers in Warzone, just turn of the Cross play and then, there wasn’t any cheater because they would be in lobbies that any PC player doesn’t exist there. But now everything has changed, and Consoles have one of the most potent cheats. Cronus Zen exists in every country and is almost a legal cheat like Mouse macro. (legally cheat means that the game developer or anti-cheat system doesn’t recognize them as a cheat and does not ban the player using Cronus.) But how do they work?

Cronus Zen is actually a device that you should connect to your controller or PC to select what you want. Rapid-fire? Zero recoils? Better Aim Assist? These are some features of the Cronus. This little cheating device, despite its size, is powerful, and console players show that open arms.

Mouse Macro is also something like a cheat, but it’s not exactly a cheat. It is some kind of intelligent mouses that have some chipsets that make you give them some orders, like reducing Vertical gun recoil. It’s not counting as a cheat, and it’s all about money and expensive stuff with more function.

Although it’s evident that some warzone streamers aren’t standard, and their gameplay isn’t just dependent on their skills. Some other famous streamers and Youtubers that are beloved and popular among players and proved their skills and playing without any hack and cheat are also hopeless from this condition and turn their faces from Warzone. Some of them, like NickMerc that almost last week, become so angry while a cheater killed him and stop streaming. After that, he starts streaming another title like Apex legends. Our lovely Jgod that 6 days ago published a new video on his YouTube channel about cheat and hack in Warzone with this title: “Warzone is basically unplayable at this point.”

You see, even these famous people are tired of this Mess and expect game developers to do something. Guys, really, what the hell going on, and why the Raven don’t do anything?

Yesterday Activision took legal action against cheaters finally. With some failures after updating the anti-cheat system even, yesterday banned cheat provider CrazyAim that provide cheats for warzone game. And also, some rumors exist that Activision preparing a better and powerful anti-cheat system.

finally, I have some words with cheaters:

bro, listen; it’s not cool to annoy others and not let other people enjoy the game just because of a ridiculous win. You know that you gain every kill and win with no skill, and it’s just a tool function, so that is worth nothing. Play fairly even if you are not pro; practice and repeat will make you a better player, not using Goddamn cheats. Let our gamers community get better and cooler for all of us. Don’t use cheats, men. Let others also enjoy.

So even if you still take this as a joke and you want to use that shits, See you in the Verdansk, let’s see who would wins 😉 Good luck.