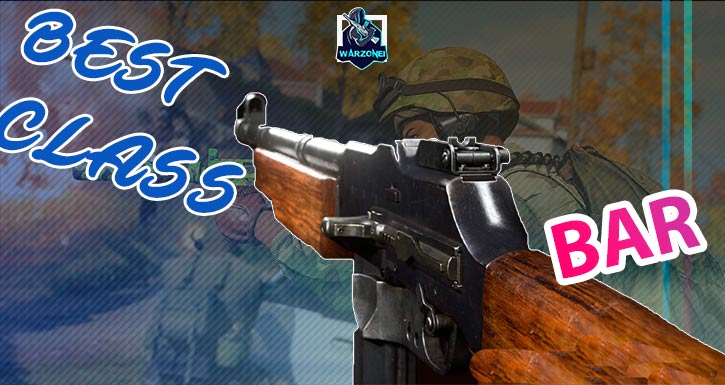 The vanguard beta version is live now, and so many players playing this FPS game now experience the nostalgic World war 2 guns and prepare themselves for shooting with those guns in a warzone. BAR is one of the most exciting and powerful guns that players show open arms to it. So here we prepared the best vanguard Bar setup.

during World War 2, American forces using Bar weapon that is an automatic rifle. And now the Bar weapon has made a comeback in the vanguard game, and this old weapon again is here, and it would be so soon in  Warzone. With its awesome TTK, this gun gains popularity in Vanguard multiplayer, and many players ask for BAR’s best loadout.

The Bar is an automatic rifle that stands between Light machine guns and assault rifles class. This gun is a heavy-weight weapon like an LMG gun and hasn’t a high fire rate, and it’s just so powerful to shred enemies with a few bullets.

All in all, this weapon found a place in players’ hands and loadouts worldwide in Vanguard, so we prepared almost everything about this gun that you may need to know while you want to use this gun.

How to get BAR gun in vanguard?

After Level 18 in vanguard, you will get BAR

so as you know, the Vanguard would be the next title that would guide the Warzone. And so this makes us prepare every information about Vanguard’s upcoming weapons like Bar. Here is the best loadout setup for Bar in the Warzone.

this muzzle is a wise choice because, alongside all its advantages, it would reduce your weapon firing noise and flash, and it’s so awesome for little multiplayer maps. Anyway, this muzzle would also increase the gun’s accuracy instead of a little reduction in Aim down sight speed.

this under-barrel makes your gun heavier and adds some additional weight to your gun that would cause of reduction in Aim down sight speed. but instead of this weakness making, it would make your gun more accurate while you hip firing, and also it would reduce the weapon’s recoil.

the next important part of this weapon is its barrel. And most important feature of this barrel is that it’s very stable and accurate, which is good for an assault rifle. Also, it would reduce scop sway and Gun bob. But this attachment also would reduce the Aim down sight speed, and there is no better choice for us.

after the barrel, now it’s optic turn to play its part in this setup. And we choose this optic because its precision sight picture is tiny and doesn’t bother you while you are looking for the enemy.

this Stock would play a major role in this setup. It would make a huge change in the gun’s accuracy and affect very well on the recoil reduction. Improving the flinch resistance and aiming stability are the other important points about this Stock. But you should deal with its reduction in mobility and Aim down sight speed.

you know, empty clips would need more time to reload, but this item would make empty mags reload faster, and it’s also so useful in the multiplayer game.

there is nothing special about this kit, and it wouldn’t affect your weapon or gameplay. This kit just increases the XP that you gain per kill.

you need to reduce this destructive weapon as you can, and this item would specifically serve this goal and reduce the weapon’s recoil.

These rounds would keep you off of the minimap while you shooting, which is fantastic.

This magazine would affect so good on mobility and Aim down sight speed. It would restore the lost Aim down sight speed that other attachments caused that. And on the other hand, this would increase the fire rate and recoil control and makes your gun more accurate.

the wisest choice among the items in the first perk list is the ghost perk. Ghost perk would make you undetectable for enemy spy plans and radars.

this would appear enemy on your minimap while they shoot with an unsilenced weapon.

you have extra lethal while you spawn, and also, you can see exactly where you dropped the lethal.

heavy weapons like the Bar need more effort and movement for running from enemies. While they reduce your speed and mobility, this perk would restore that and increases your tactical sprint time and crouching movement speed.

overkill perk lets you carry two primary weapons, and it and so helpful while you want to engage with close enemies. After that, with the following loadout, you can change your perks and peak high alert perk that is a buffed item in-game. It would let you know while enemies aimed at you and also you can hear enemies walking sound even while they pope a dead silence.

you can see enemies field upgrades, lethal and other items, and you can mark them for your teammates and hack some of them like C4, proximity mine, claymore, and trophy systems.

this gun is a mighty gun with a heavy-weight and low-speed fire rate. If I want to be honest, I don’t think other guns would have such this power, but still, there are many good guns with similar TTk in Vanguard like Stg44, Nz-41, and Volk. Also, Vanguard has some great LMG guns that become handy, like Dp27.

we have two different types of weapons in Warzone, some of them found a way into the Verdansk from MW title, and others came from BOCW. I want to suggest alternative guns for Bar from the MW title, I can name Ak47 (BOCW) and QBZ., and if I want to go through the MW guns, there are plenty of choices like Sa87 and Holger.