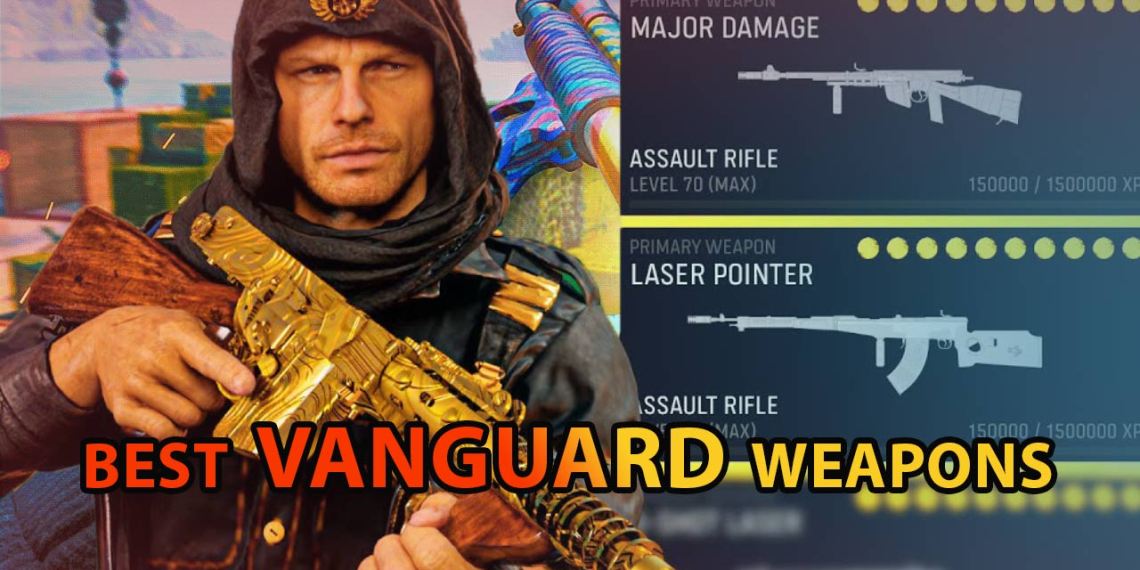 Game news is full of new information about the newest Activision title that now is available for players. Cod Vanguard is live finally, and the battle would continue in this title with WW2 weapons. Read about Best Vanguard weapons here.

Vanguard is live now and gains good reviews and scores. The number of players increasing every day, and more and more people are trying this masterpiece of WWII right now. The Vanguard has so many exciting aspects of attracting players and achieving more population; for instance, the new Anti-cheat system is a good reason for players to continue the game and hope for ending cheaters and hackers Sovereignty.

You can use the best Guns introduced in this article in the pacific map of the game.

The WW2 environment is attractive enough for an FPS game; now imagine WWII weapons combined with those excellent features designed by one of the most outstanding gaming companies. Vanguard weapons made a new area for WW2 shooting, and for being the winner in Vanguard battlegrounds, you need to know your guns and best weapons very well. So that’s our motivation for writing this article about Vanguard’s best weapons in different categories.

in this part, we prepare the best seasonal weapons in all classes for you to choose them. The most potent weapons include meta weapons that are awesome for having a place in your hands based on seasonal changes; suitable for both Call of duty vanguard and Warzone are here in this list for you.

there are not many options for close-range conflicts; in close-range battles, you need to be as fast as possible and save time to save your life; the border of death and victory would determine with your weapon and your quickness. You need SMG guns for their high mobility, excellent fire rate, and their sharpness to deal with a near enemy. Here is the best Vanguard SMG guns below.

weapons with balanced damage and fire rate that have great function for mid and far ranges, some of them also because of their high fire rate are suited for close range, but always SMG guns are lighter and make you faster. This class has the most usage in FPS games and always has a place in the player’s hand. This list depends on weapons features, some of them maybe have recoil and don’t feel good for you, but all are powerful enough to eliminate enemies from far ranges even. Here we named all the best Vanguard assault rifles.

this class has more power and more deadly bullets, and better accuracy, but on the other hand, they are heavier than other weapons. Light machine guns always remain a good option for players who need more bullets and powerful shots. Enjoy better and more games with the best call of duty Vanguard LMGs and the best Call of Duty warzone mice.

They are also a good choice for far ranges. Heavy guns also have their particular fans, and here is the list of best LMGs in Vanguard.

If you want to know the best weapons of Call of duty Warzone game, read this article

sniper rifles, these class weapons, are famous because of their accurate and deadly bullets. a Class made for far-range enemies with the least possible bullet drop. these weapons would kill the enemy with just one good shoot, and because of these features, they become an inseparable part of FPS games.  Snipers weapons that are accurate and powerful.

another close-range weapon that has awesome firepower but a low fire rate and damage range. Killing enemies in mid ranges is almost impossible with shotguns, and they are just fantastic for close ranges. So you should search for enemies in buildings and surprise them with more than 5 bullets with one shoot. These guns destroy enemies in tight fields; each closer they are, they would die easier.

this gun shooting type is single mainly or burst mode; there is nothing special about them except their excellent firepower and damage range. You can use them for any conflicts with suited optics. Some of them are good enough to play a sniper rifle rule, but unfortunately, they haven’t bullet velocity like snipers.

quick, low bullets, but deadly, mainly while you use them in AKIMBO mode. Sometimes you need them to be your secondary gun because of their low weight, and sometimes you have to choose one of them and keep fighting for your life. So it wouldn’t be useless if you knew them better and found the best of them.

Do you need more firepower? More explosion and more fear in the battleground? These weapons are whats you need. Launchers help you eliminate more than one target with just one bullet or destroy vehicles quickly. of course, they never had a place in meta guns, but don’t forget that they are more potent than any weapon.

some players prefer to hunt down enemies silently with different strategies like running after them. Some players like to have higher mobility than other players, and because of those reasons, they choose this class of weapons, fast and silent, with no need for ammunition.

which gun is the best in Vanguard?

Right now, in Vanguard multiplayer, the meta weapon is MP40 that is very good because of its significant damage and low recoil. It’s an SMG gun and has an excellent fire rate and fast reload, which makes it perfect and almost all the players are using and upgrading this weapon right now.

What is the best Assault rifle in Vanguard?

If you are looking for a rifle for far-range battles, I suggest BAR, which is overpowered for far ranges and kills enemies instantly in far ranges thanks to its high damage range.

What is the best gun for beginners in Vanguard?

Beginners need a weapon with no recoil and a good time to kill; the best option for them is STG44, and they would start with this gun. Other weapons and meta weapons are also good, but this one control is better, and new players would be more comfortable with this weapon.

How to Get Call of Duty: Vanguard and Download