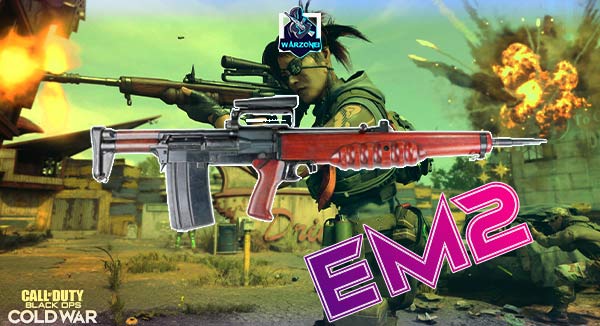 Get ready for Janson Em2 weapon. This new weapon shall pull off and be one of the best assault rifles in the warzone. Here are the best attachments and best perks for this gun. Also, there is some more information about Em2 below, like  How to unlock Em2 ?

Activision used to publish the new season’s road map one week before the seasonal update. Now we have the season 5 road map, and it gives good information about the Em2 gun.

The most exciting part of the road map for players is the weapons part, some new weapons that going to change the rules and make a unique experience for all players who exited for shooting with such English old guns.

This assault rifle going to be ready for play while the update lunches. As we saw the new operator (Kitsune) using this gun in an official trailer with a high zoom optic, this gun would probably have excellent damage range, and it’s suited for long-range conflicts. So, if the Raven also set a good accuracy and fire rate for this gun, for sure, this would be the new meta in the fifth season.

So let analyze everything about this gun to gain the best of that in Verdansk and be one of the first persons using this Englishman.

it confirmed in the road map that this gun would be a battle pass reward. It would unlock in tier 15 of the season5 battle pass. You can simply play and gain XP to reach tier 15. (probably Em2 is a free reward, and even if you don’t buy the battle pass, you can unlock it).

And second way, if you want to play with this gun ASAP before the others, you can buy the battle pass premium that unlocks 20 tiers instantly for you, and in a second, you have access to play with the EM2.

After unlocking the weapon, you need to upgrade that to unlock the attachments. Read how to upgrade faster guns article; it would help you to do that faster ;).

we prepared the best Em2 set up for you, and no need to introduce this gun; it is now one of the best guns in the game also, famous streamers using that.

It’s the best Setup for Em2 that all features in this setup are balanced and standard enough to support both Close and far range conflicts thanks to its incredible firepower. If you looking for a new gun, Em2 is the best choice, and it’s now among the best Warzone guns. 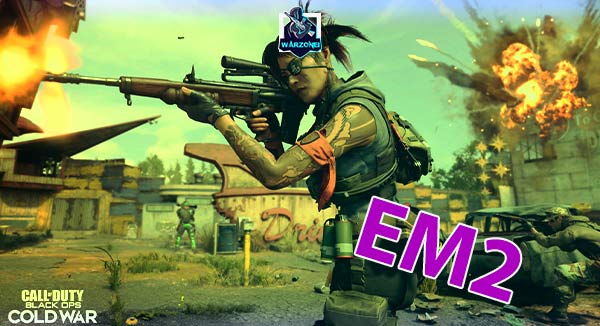 It happens for everyone to die in critical moments, just because of the enemy’s lethal. It’s really annoying, using E.O.D. Perk would reduce damage from explosives and enemies lethal.

it is an incredible perk you will notice while the enemy aims at you, and you can run from that. Also, in the last update, Raven improves this Perk, and even you can hear the walking sound of enemies while using Dead silence. It became a popular perk now.

If you want to carry an SMG with your weapon or other classes, you should peak the Overkill perk. So you can peak high alert perk with your following loadout.

this gun would be customized for long-range battles with heavy barrels and attachments. So it becomes a heavy gun, and it’s hard to move with that. You should switch your weapons and peak a light gun for increasing mobility. So, what could be better than the Amped perk that makes these weapons changing faster?

Em2 is still a secret, and we don’t know exactly how it works. If we want to speak about season 5 guns, you can use C58, Krig6, and AK47 (BOCW), which all of the called weapons are among the meta guns right now and show their best function.

But in the fifth season with gun balancing, this condition would change, and we should call some other guns meta. So if we want to name some guns without considering meta guns, M4A1, Oden probably has similar details with Janson Em2.