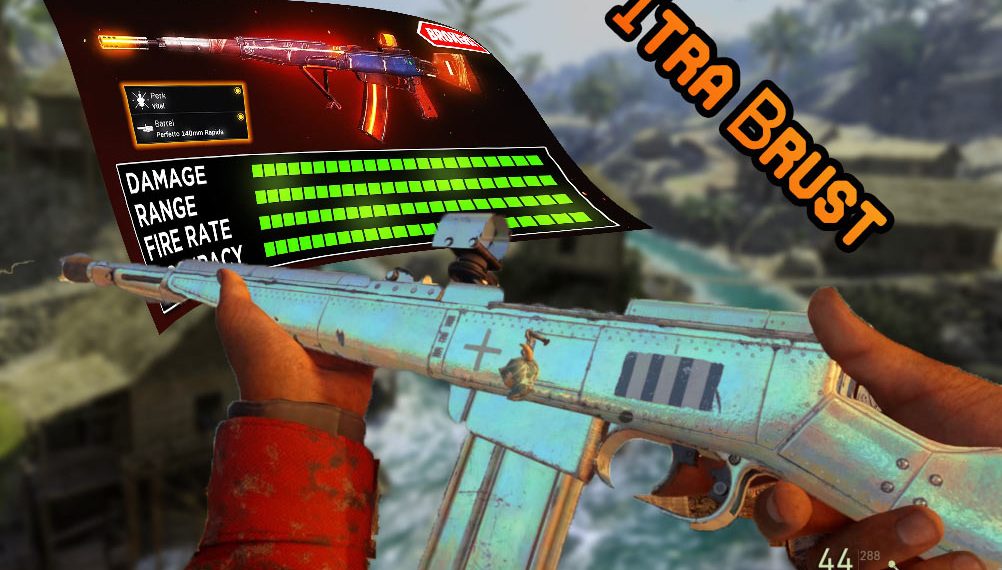 Among all of the weapons that Vanguard brought into the Warzone, Itru Brust is the only Brust-fire weapon. And indeed, in the WW2 era, there weren’t many Brust-fire weapons. A gun can be used for long-range conflicts or close-range battles with the correct setup. Here you can find Best best itra burst loadout Vanguard and Warzone.

Itra Brust is a Brust fire Assault rifle, this weapon shooting type is like BOCW AUG, but this one has a really better fire rate. This weapon can be built for every kind of conflicts thanks to its flexible attachments, high fire rate, and damage. Itra Brust is now in the Center of Attention, and most players use this gun for Pacific Caldera and Rebirth Island.

And all of that popularity is because you can kill an enemy with just two shots! It’s a sign of this massive gun power. Unlike other Brust-fire weapons, this weapon has an outstanding fire rate that makes that awesome for close-range battles. So let’s analyze these weapon attachments and best set up and prepare the gun for fighting; here is the Best Itra Brust setup.

this attachment also would enhance the weapon control alongside improving accuracy. This barrel also would reduce Scop Sway, Gun Bob, and flinch Resistance.

we don’t choose this Optic randomly; it would increase the weapon accuracy and recoil control, so we suggest this Optic.

This Grip would increase weapon control and improve hip-fire accuracy.

this mag advantage is its good ammo capacity and reload quickness.

It would mainly raise the control bar and cause some recoil reduction.

improving Initial Flinch recoil, recoil recovery is some of these Stock gifts. It would Improve Aim Down sight, Aim walking movement speed, and accuracy that all are essential.

in the first look, this weapon’s high fire rate would attract you, and next, it would show off with its serious damage. You have seen this weapon in the hand of many streamers or players in the warzone, and this gun really quick TTK is the reason for this popularity. Use this gun and comment below your experience. We prepared the best setup of the ITra Brust for Far range battles for you above.

makes you undetectable by thermal optics and does not trigger high alert warning, not markable by recon drones.

would mark enemies immediately after hurting them for you and your team.

there are not many Brust-fire weapons in Warzone, so we cant find weapons that are really close to Itra Brust. But BOCW AUG is another Brust-fire gun, and it also had its golden age in the past. And if you forget about burst firing, STG44, Bren Automaton, and AS44 are other Vanguard assault rifles that can kill far enemies quickly.

Brust-fire guns are usually not fast enough to be chosen for close-range battles, and this lack of speed would mainly concern their fire rate. But unlike all I said, Itru Brust is an excellent weapon for close-range fights or a Sniper rifle support gun; this gun has a really good TTK and ADS that are really good for close conflicts.