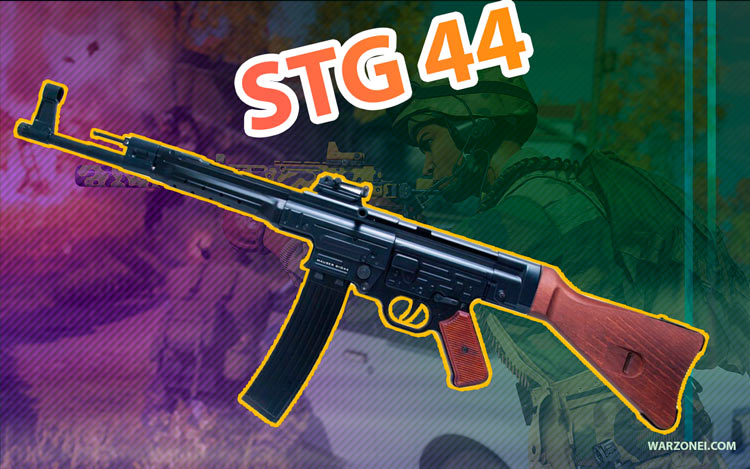 Vanguard beta released, and World War II weapons showing off in the game. one of the best guns in the Vanguard is STG44, and here we provide the best loadout and perks for you.

One of these weapons is STG44 that found a way to vanguard beta now. It’s a fully automatic assault rifle used mainly by Germans during the war, but right now, everyone can use this gun in Vanguard and have a close to real experience with this excellent rifle. And as the vanguard beta is available right now and STG44 and so many players set this fantastic rifle as their primary weapon, you would need the stg44 Vanguard best setup if you playing the game.

By the way, let’s take a look at this new gun setup.

Cod vanguard beta is live now, and it wouldn’t take long for the vanguard weapons to find their way into the verdansk. So it would be helpful to know their best attachments and perks to use while the guns come. So here is the best STG 44 for Warzone.

this muzzle would reduce the weapon recoil, and it’s the first muzzle that would be unlocked for the weapon. While you consider that suppressors are not so valuable in multiplayer, it’s the best option to choose after them.

The most important strength of this under the barrel is improving the Aim down sight speed. It’s so valid for multiplayer game modes, and also, this under-barrel would increase the sprint to fire speed and Aim walking movement speed.

this ammo type would decrease the enemy’s movement while you shoot in the enemy’s legs. And also, it would delay enemy healing and increases flinch dealt.

There are many similar choices here in rear grips, and they mostly focused on improving the Aim down sight or recoil control. we chose the first rear grip that would help us to control the gun.

so many good choices exist in the optic part, and totally it’s a personal choice in optics. however, our suggestion slate reflector

this stock would help us in Aim walking steadiness that is so useful in multiplayer maps. Aim walking movement speed is one of the other improvements of this stock. It also would improve initial accuracy and recoil instead of some decrease in hip-fire accuracy.

it’s a cool new item that has an amazing feature. This would increase reloading speed when you are injured. And it’s a special item because if your weapon is not ready, you will die.

so many items exist in this part, and it’s completely a personal choice depending on your gameplay.

As you know, you can use 10 attachments on your weapons, and there is just a magazine and barrels. Actually, these attachments wouldn’t serve very well to your weapon while you want to use that in multiplayer, and we don’t suggest that. However, there are other attachments.

Magazine: (not recommended) 7.62 Tokarev 30 round mags

because this mag would cause the stg44 loos so much damage and bullet velocity, we don’t recommend using them, but if you really want to use a mag, it’s the best choice.

this perk also is one of the most valuable perks in Vanguard. With this perk, you would see the enemy’s position on the minimap while enemies shooting with unsilenced weapons.

valuable perks with the exact function that they have in the Warzone. Overkill allows you to carry two primary weapons and double-time increases tactical sprint time.

STG 44 best perks to use warzone

Cold-blooded perk became more useful while the COMBAT SCOUT perk was added into the Verdansk to become undetectable while enemies who use combat scout shooting at you. It also would help you to hide from night visions and thermal optics.

this is one of the most valuable perks right now in the Warzone, you can fill your armors with 2 body armor instead of 3, and you have more effective body armors.

after shooting the enemy, it would mark for you and all of your teammates. You can hurt enemies behind the walls with this perk easier than before.

there are many nostalgic guns in Vanguard that came from World War 2 into the game. Like the Itra burst that is a good choice for vanguard beta. Other guns, such as Volk which also had a significant function in the game. And if you need a hand from SMG class guns, MP-40 is an excellent option for you. Indeed while the Vanguard guns found their way into the verdansk, these guns would be game meta guns.

in the Warzone, you have plenty of choices for primary guns. Great assault rifles like FARA 83 and AK47(BOCW). These guns have a close fire rate and firepower with STG44. And between the MW guns, CR-AMAX has a similar recoil pattern to this gun. And if you looking for guns with less recoil and easier control, I suggest Killo 141 and m4a1.