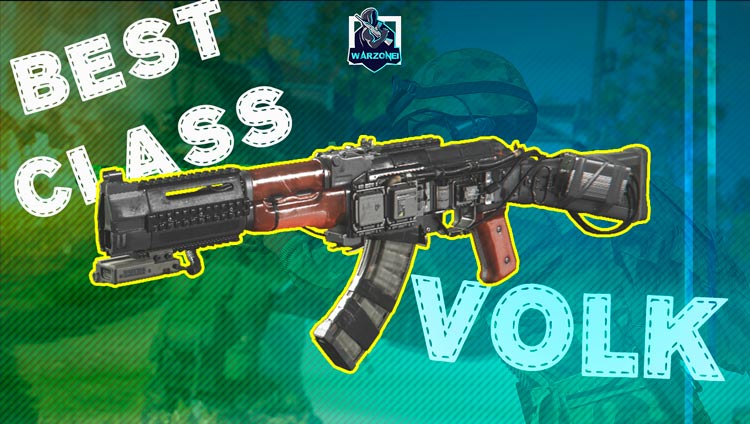 There are so many great Assault rifles in Vanguard, which is why some guns get underestimated by players. But Volk is a great gun, and here we prepared Vanguard Volk loadout for you.

As you Volk the weapon is the final weapon to unlock in the beta version of the newest Activision FPS game called Call of duty Vanguard. While some guns like Stg-44 and BAR are showing off in Vanguard, players ignored other weapons, but Volk has fantastic potential to gain popularity and become meta guns in Vanguard.

Volk is an automatics rifle with suitable features for the multiplayer game, like high fire rate and good damage. While we compare the Volk with other assaults like BAR, it has higher mobility and Aim down sight speed, and this speed makes this gun better than other Vanguard’s rifles. But some guns like Stg-44 have the most useful just because of the higher firepower.

And if you compare the TTK between vanguard guns, you can see the Volk don’t take long really to take down enemies. Alongside power, this gun has a tinny body that doesn’t cover the whole screen while you aim. There are still many other great features to speak about, but let’s first go through the Volk Vanguard attachments.

here is the best Volk weapon Setup for call of duty vanguard and  warzone.

the most important thing about this muzzle is improving the recoil control, but alongside that, the M9 flash hider would totally hide your weapon shooting flash from other soldiers.

This custom Volk’s barrel is built extraordinarily accurately and controllable, making you feel more comfortable while shooting with the weapon. Also, this barrel would reduce scope sway and gun Bob. It’s not finished yet, and still, this barrel has other benefits like Increasing Volk damage range. It’s the most significant part of this setup.

it’s the best optic for vanguard weapons because of its tiny precision sight picture, and so many people suggest this one.

This item would just reduce the movement penalty.

we just suggest this one because we haven’t access to good things in this part yet. And it really doesn’t matter so much.

as this weapon has uncontrollable recoil, we should try to set attachments to reduce the weapon recoil, and this rear grip would also serve this goal and improve the recoil control.

among all of the ammo types, it’s what you want. It would increase flinch dealt and also delay enemy healing. Also, this ammo type makes enemy movement slower if you shoot the enemy’s legs.

this attachment also would help us to control the Volk. It would increase the recoil control and also improves hip-fire accuracy.

THERE IS ALSO TWO EMPTY SLOT THAT WE DON’T SUGGEST TO USE THEM, BUT IF YOU NEED TO USE THEM HERE, IT IS.

This magazine is not suggested by us, and it’s just the best possible option in this part. It would increase the recoil control and gun accuracy that is so good, and also it would improve mobility, movement speed, Aim down sight speed, and fire rate. That was all of this mag benefits, but on the other hand, it would reduce bullets velocity and damage range, bullet penetration, and damage.

so as you know, the Volk is one of the best rifles in Vanguard, and probably it would be the next Meta in the warzone, and you should upgrade and save a place for the Volk in your loadout. Like every other player that Volk takes place in their hands.

So here is the best Volk Setup for warzone.

would hide you from enemy spy planes intel and field mics.

it’s one of the most popular perks in Vanguard. While the enemies shoot with an unsilenced weapon, you can see their exact location on your mini-map.

if you want to carry two primary weapons, you should peak this perk. It would be helpful when you use a light gun like Volk

This perk would help you to survive from explosives. While you selected the E.O.D perk, you would gain more minor damage from non-kill strike explosives and fire.

you can see the enemy’s footprint, and it would help you follow them and take them down.

Volk is a short rifle with excellent mobility,  but it has high vertical recoil, and it’s hard to control the weapon while you shooting at enemies. You can feel this recoil specifically for far-range conflicts. So it’s a suited gun for close and mid-range conflicts, like M1928, Stg-44 that’s both awesome for close-range battles. Other Vanguard SMG weapons also would work awesomely. Here in the STG article, you can read more about STG-44 and its best setup.

as you know, Volk is one of the best secondary guns with a sniper rifle, like FFAR1 and Xm4. These weapons can play Volk role for you and be a suitable replacement for that. All of them have reasonable fire rates that are the common feature between them. And if I want to suggest MW weapons, I can recommend M13 and Grau.