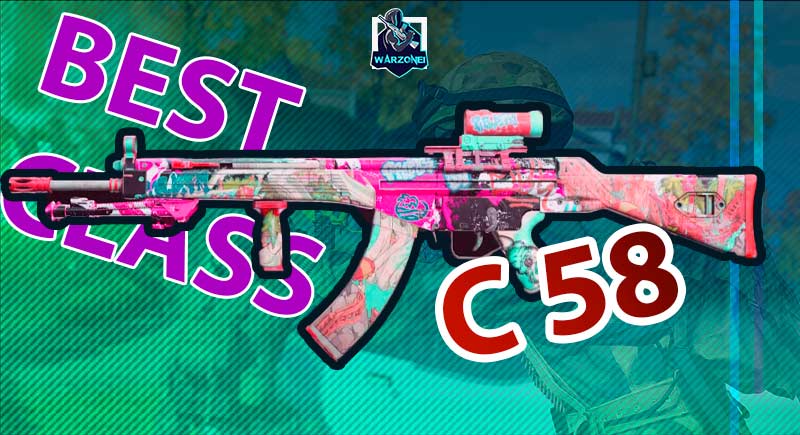 With the season 4 update, so many new guns found their way into the Verdansk 84. One of these weapons is the C58. This gun turns you into a killing Machin, especially in the close and mid ranges.

If you remember the golden days of the FAL and DMR 14, I should say now they’re not usable, and they give way now to the C58. This gun shooting type is single shoot, like his older brother FAL.

But this gun has less recoil than the FAL, and using that is not difficult, and you can easily shoot your bullets without missing shots. Moreover, C58 has an acceptable fire rate, and this fire rate didn’t make that so heavy. And this great gun shows good mobility also.

After all, let’s check the best attachments of the AMAZING C58

The best C58 class no recoil of Warzone Season 4 is:

It’s better than the regular suppressor for long-range guns. It has some Aim down sight speed penalty, but on the other hand, it would decrease the vertical recoil. (for long-range guns, the ADS penalty really would not annoy you. It mostly has importance in close-range conflicts.)

Also, it would improve accuracy, bullet velocity, and effective damage range that all are essential features for a far-range assault rifle.

Decreasing gun recoil on both sides would make a perfect match with the Agency suppressor. The agency suppressor would reduce the vertical recoil, and this barrel would also increase horizontal recoil. It also would improve the gun effective damage range, which makes sense as we use this assault rifle for mid and far-range battles.

We use both the muzzle and barrel with the highest bullet velocity because it really matters for an AR gun.

It totally depends on you, but if you want to deal with sniper players and challenge them, I recommend the 4x optic to make the job easier for supporting a more extended range.

But if you don’t need super long-range shots, use the 3X optic.

long-range targets always need more bullets to take down an enemy, and it has a lesser effect on the Aim down sight speed, and it makes this Mag the wise choice.

This gun has little recoil; still, you can reduce that with the Field agent Grip. It also has some ADS penalty, but it’s the best choice for lowering both vertical and horizontal recoil.

My experience with C58

First, let me speak about this gun’s recoil. This gun hasn’t an uncontrollable recoil; also, because of its straight recoil pattern, so it’s so easy to control its recoil. If I want to be honest, even you don’t feel any recoil while shooting with that.

Also, while the Raven nerfed this gun, it still has an awesome TTK, and it would eliminate enemies in a jiffy. And it mainly depends on its damage and straight recoil pattern. Also, it makes your job more accessible because of its high bullet velocity when you want to hunt down enemies who are running.

It’s one of the best assault rifles in season 4 yet. We prepared that astonishing for both Verdansk and rebirth island with that Class and enjoy executing the enemies.

Using this gun with a sniper rifle, I suggest using E.O.D because it reduces the non-killstreak explosive and fire damage and grenades. It’s so valid for sniper players.

Cold-blooded perk is also beneficial and helps you to hide from Thermal optics and AI targeting systems.

Almost every player in the game first buys a loadout and peaks his guns, and next, with the first zone loadout, which dropping automatically, they peak the ghost perk to hide from the heartbeat sensors and UAV. It’s so helpful if you want to use sniper rifles.

High alert perk helps you find out when and where the enemies are aiming at you and shoot you. This perk able you to run and getting cover before the enemy even hurt you.

Tune-up perk helps you to revive your teammates faster and run from the killstreaks,

While you are using sniper, changing weapons quickly because fighting with rusher players so that this perk play an essential role for you in close range battles.

all in all, as you want to play in the Verdansk, you can choose your perks, but these perks were the most useful and most popular perks for this weapon.

What are the best attachments for the C58?

It's so good before using a weapon, know its weaknesses and strengths. Technically, as this weapon hasn't had a high fire rate, it needs to increase bullet velocity to compensate for this weakness. Also, this gun has a straight recoil pattern, so you need to control its vertical recoil. Analyzing other features of this gun also shows that it mainly needs improving in control and bullet velocity, so you should choose your attachments to strengthen those points. And if you pay attention to the C58 Class we prepared above, you see we ultimately choose the attachments according to the increasing bullet velocity and reduction vertical recoil. So that Class which we prepared for you contains the best attachments for the C58.

Is the C58 any good in the warzone?

Buddy, listen Every season, some of the more powerful guns than other guns and players use them more and more, called meta guns. And right now, in the Verdansk, the C58 is a meta gun. And even most famous gamers and YouTubers play with this gun right now. And recommend that to the other players. So actually, it's not just good, but it's some sort of killing machine.