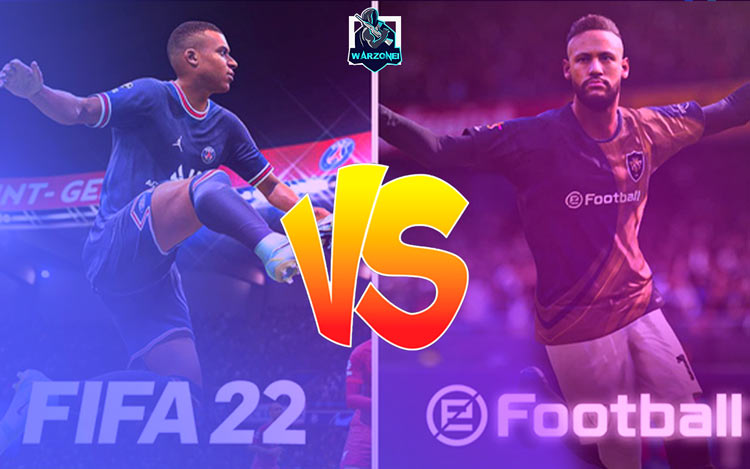 fifa22 and Efootball 22 are released now, endless competition between this close to real sports game still continues, and now this brawl is hotter than always.

Both the EA and Konami companies released their newest sports games, FIFA 22 and Pes 22, players are experiencing both these titles, and there are many different news and feedbacks of these games on the web. Both developers have made stunning changes in these new titles to keep up in this competition. For example, this year, Efootball is free to play, and it’s a significant change that would attract so many more players; FIFA 22 also have good visual content improvement.

So, it’s natural that players or new players be in doubt to play which title this year and which one is better. They need an accurate comparison, and today we want to compare these two new games in many different aspects; read more in continue.

we compare these titles in various aspects, like gameplay, graphics, price, platforms and system requirements, to help you decide and judge between them.

as you know, PES uses Unreal Engine. For eFootball, they used Unreal Engine 4 produced by epic games. Most Football fans expect enhancement in graphics, and they were exiting for an improved graphic perspective. But while the game launched on September 30 for its supported platforms, players didn’t show open arms, especially on the steam platform. The eFootball now takes place in the worst-rated game on market place, according to Steam250. This game actually shows terrible function, especially in graphic and visual content.

FIFA also still running its game on the frostbite engine and tried to improve visual content. So surely we should expect better graphic form the FIFA 22 title, the better visual content of this title indeed attract more players. And it actually made impressive changes to the previous version. So without a doubt, this year, in graphics and visual content FIFA 22 overcame eFootball.

After that, faces would be revied; unfortunately, PES 22 made a mess in this part, which was really a retrogression for this franchise. FIFA, in the opposite, made an excellent process from the last title, actually in a word we can say this game show a good performance and become popular now.

Other Face members also designed better in FIFA 22. briefly, in FIFA, faces are designed like they are about to kill someone and in PES look like they regret killing someone.

the most significant rival for FIFA was always PES series, and this two title experienced a long journey. in the latest years most of their brawl was on the teams and team licenses. So this year also we should expect the absence of some teams in this titles.

eFootball, in the beginning, would contain the Allianz Arena, Allianz Stadium, Camp Nou, Emirates Stadium, Old Trafford eFootball Stadium; stadiums and it would be more later. 9 teams are also there

Some other teams would arrive later, like AS Roma, Atalanta de Bergamo and Lazio, which Konami has a partnership relation with. Also, the official eFootball tweeter account announced that Neymar Jr I is the new Ambassador for the eFootball.

And EA this year again published the most complete football game, which includes more than 17k players, more than 700 teams and 30 leagues. Also, 100 stadiums confirmed so far for FIFA 22 title. You can play with all 20 Premier League clubs, all 72 member clubs of EFL, all of the LALIGA standard clubs, all of the Bundesliga clubs, Serie A teams, Ligue 1 teams. Most of the biggest world clubs that FIFA have their licenses; you can also experience them in the FIFA 22.

FIFA, in this part, also would benefits from owning licenses because of the right to competitions like the champions league and Europa league. This year, FIFA would also contain more game modes than PES; FIFA has smoother gameplay and brings closer to actual experience for players. Because of its improved graphic, especially in players’ faces, provide more engaging visual content for players.

eFootball PES 22 have lesser modes than FIFA; this title gameplay became simpler because of its new Supported platform(smartphones). And it didn’t make any essential other change from its previous titles. And we should stay wait for other teams and game modes to show up in the PES 22.

FIFA 22 this year released for PS4/5 Xbox one and Xbox series S/X, google Stadia, Nintendo Switch and Microsoft windows that cost $59.99 or $69.99 depends on your console and $99.99 for the ultimate edition.

PES 22 is also available for PS4/5 Xbox one, Xbox series S/X, steam and mobile phones (iOS and Android), and it’s not available for Nintendo switch yet. This title also is a free to play game.

All in all, you can see, the FIFA 22 title has better performance in most parts and attracts more players. And the only benefit that PES 22 have is its free price and adding mobile phones to the supported platforms list. Also, this article wrote without any siding and partiality toward each game.

FIFA 22 worth to purchase?

Actually, it totally is Personalization, but if you are a sports game fan, this game is a complete and fantastic game to experience. This game made good improvements from the previous title. And because of its attractive visual content and improved gameplay alongside a smooth control, we can say yes, this game is indeed worth buying.

eFootball Pes 22 is live now for major platforms, and you can enjoy this free game on the leading platforms. This game will be Available for IOS and Android later, while the first main update launches in the Autumn.

While we analyzed both titles, we found that EA made essential changes every year and tried to make every new title better than before, even with increasing teams licenses. Konami also didn't put his hands up and tried to make some changes like changing the title name and make the game free. Still, because of some lacks, especially weakness in visual content, FIFA 22 has found more players and has won this competition up to now.