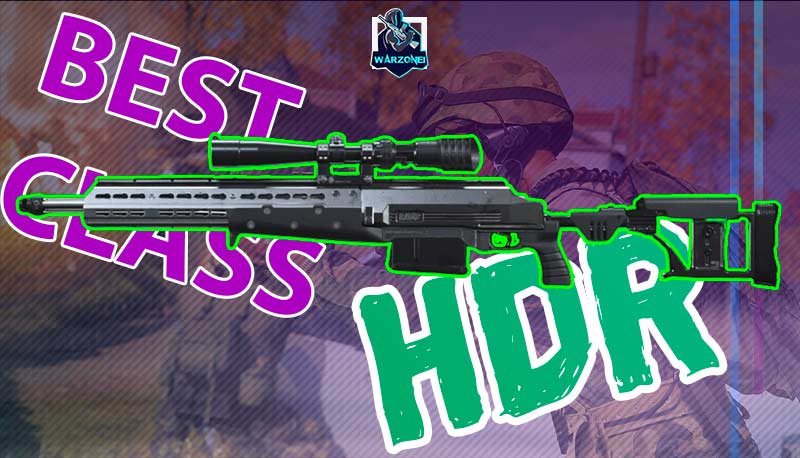 So many new snipers added to the warzone from the early seasons, but still, the HDR is the best for firing the far ranges .its amazing and has the most minor bullet drop between all the snipers. If you consider some prominent features such as damage and range, it would be fantastic for you.

After having a long journey in Verdansk and experiencing so many days in the warzone, this gun still has a significant function. If I want to be honest, there are still better guns than HDR as a sniper, Such as kar98. But I promise that it has the tiniest bullet drop and tremendous damage. Sniper players surely annoyed by other sniper rifles bullet-drop. Try this HDR class warzone to see an accurate sniper and incredible bullet velocity with With no doubt, it’s the best for far ranges.

This gun in the warzone has some tricks. I will speak about that in the following text.

This is one of the attachments which increases the damage range and accuracy.

If we want to speak about these laser pros, we should name increasing Aim down sight speed, aiming stability, aim walking steadiness, accuracy.

On the other hand, this laser has a weakness, and that is just while you aiming with that, it would be visible for the other players.

It would give you two different zoom levels, and it has the highest zoom level between all optics (12.6x)

Aiming stability and aim walking steadiness are the most important strength of this stock.

It also has some other pros like increasing accuracy and control.

My experience with HDR

Although this gun is heavy and needs a light secondary gun like Xm4, Bullfrog, Mac10, it is still worth using in Verdansk. It has incredible range and incredible damage, combined with an acceptable ADS and mobility. Its variable optic also makes that suitable for any situation. Its reloading time is not so slow, and it doesn’t have such a difference in reload speed against light snipers like kar98.

First of all, there is a pay-to-win trick in the warzone. If you have THE OCEANOGRAPHER blueprint, .while you using that, you have more visibility while you aim with that.

Lethal :c4 or proximity mine ,claymore

While you carry a sniper rifle, you need to be on the high grounds and elevated buildings. Many sounds and enemies can easily surprise you, especially from the elevators and zip lines .you should be more careful. And for elevators, stairs and zip lines, you can use those three lethal to hurt enemies and be noticed while they’re coming to hunt you.

The first one is most using tactical in Verdansk and help you to found the exact place of the enemies just distance of 50 meters, the second one allow you to quickly recover your health and makes you faster for just a few seconds.

There are many choices here, but I named just three of them, which are helpful for a sniper player .that three perks, without any doubt, will make your job easier as a sniper.

Double time: you need to run? GAS is coming? You have faster legs, so use them because you selected double-time perk.

Cold-blooded: some snipers which you want to deal with them would use thermal optics. What’s the solution? cold-blooded make you a snake with not any warm sign that makes you highlighted in the enemies scope

EOD: taking more minor damage from the explosives and fires will be helpful, especially when you or one of your teammates are down.

At the same time, you need both your weapons and also you should be a ghost to hide from enemies UAV and Heartbeat sensors .best solution is that ASAP after landing, you buy a loadout and peak your guns and then while the game first loadout camas, (first zone ) peak the ghost perk.

It’s so valuable for you to have a quick reaction to the near enemies and surprising attacks. You should change your gun quickly, and this perk makes you faster in that.

To sum up, I should say don’t search for a gun to be better in ranges than the HDR because that gun doesn’t exist in Verdansk. But maybe you show better performance with other snipers like KAR98,  pelington 703. They just help you to be faster and not any more. There are other heavy snipers also, but it just depends on you to have better performance with which one.