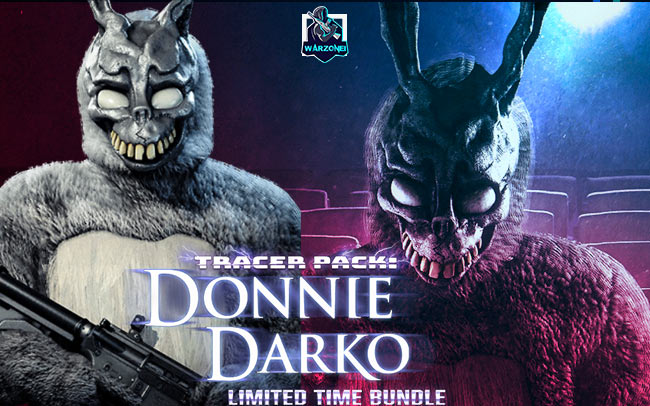 How to Unlock Donnie Darko Bundle in warzone

On the occasion of Halloween, Call of Duty warzone added a Halloween-themed content to the game last year.
Donnie Darko Bundle is one of the scary skins of this game that you can get on Halloween event. After adding the ghost face bundle, now is the turn of this scary skin.

a massive rabbit with a scary face and large teeth showed up going around Verdansk ?.

Donnie Darko is a 2001 science fiction movies figure, this character’s movie written and directed by RICHARD Kelly. This movie was also named Donnie Darko (2001), which probably you knew that before and watched that once because it’s a good game and showed good performance on screen in the past.

There were rumours about this movie Re-release in 2017, but we didn’t still any fresh news about that. However, Activision again gives this character a second chance to get popular with the HAUNTING event that is live in Warzone for Halloween occasion, and it’s now the competition between Donnie Darko and Ghost face in the warzone. In the movie, Donnie Darko was the leading man name, and the Rabbit name was Frank, But in the Warzone, this bundle and Character was released with Donnie Darko name.

This scary rabbit (Donnie Darko) with three skin beautiful weapons can be bought in Bundle Donnie Darko and scare everyone in Verdansk.

The price of this bundle, which was released in the sixth season of Call of Duty warzone games, is  2,400 Cp.

The countdown until the end of the world has begun with the Tracer Pack: Donnie Darko Bundle. Note: this Bundle features Blueprints with Purple Electric Tracer Fire, Electric Dismemberment, and Electric Elemental Damage in Zombies Mode.

Donnie Darko operator will be added to the Call of duty Warzone game at the same time as the release of the Ghost of War bundle on Halloween.

How to Get Donnie Darko bundle?

There are two different ways to buy a bundle, either you can buy CP from the Amazon store or get this bundle through free Earn to get CP.

When is Donnie Darko leaving Call of Duty warzone?

In the game store, all bundles purchased will always be in the game. They will only be removed from the store for a short time.

The Donnie Darko bundle will also remain in the game for ever.

When will Donnie Darko be released date?

The bundle is released on Halloween.