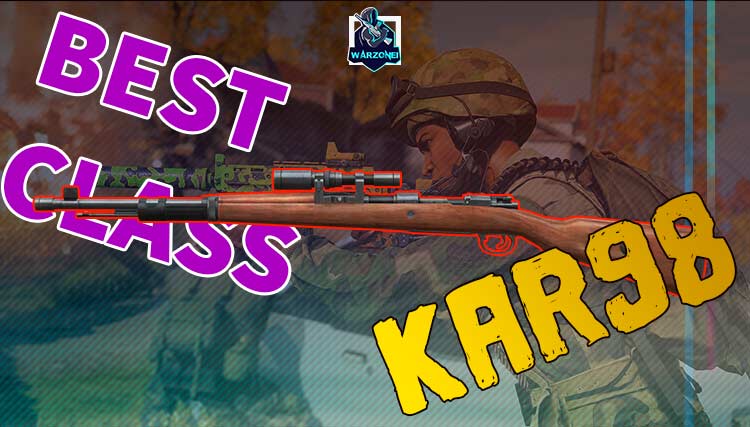 Sniper players, I have something for you. I know that now you prefer to have a faster gun rather than a heavy gun. Actually, most of the snipers think that way, and because of that, they start using a marksman rifle instead of heavy snipers. You know, I think the game rules have entirely been changed; I mean, now players prefer to be faster and agiler than carrying heavy guns because of their significant damage and damage range.

Kar98 shows up while this gun was the only marksman rifle that could be superseded instead of sniper rifles. Quickness, sharpness, great accuracy, low bullet drop, fast reload are some of the kar98 Turning points. Because of these reasons, almost 90% of sniper players are using kar98; also, even with its competition with Swiss k31‘s, kar98 is still one of the most helpful guns in Verdansk.

Here we prepared one of the quickest kar98k warzone attachments for you.

this muzzle is the best choice for this gun because it increases the damage range and gun accuracy; these are essential features for a sniper rifle

also, its other feature is sound suppression that helps you to hide from the enemies

the heaviest barrel for kar98 brings more damage range and bullet velocity .also its reduces the gun recoil and helps you control the gun easier.

This barrel makes your kar98’s bullets like a sniper rifle. Sometimes you will forget that this gun is a marksman rifle.

It’s the only option in this part, but it increases the accuracy, mobility, and control. Other features of this laser are increasing in aim down sight speed and aiming stability and steadiness. but while you are seeking with the gun, this laser will be visible for the other players

You can use a rear grip instead of a laser. But the laser is the wiser choice because it will increase mobility and make your gun so faster.

It just changes the gun’s zoom level. You can select every scope which is easier to work for you. But I suggest variable zoom scope.

This stock increases your gun accuracy and control. Also, aiming stability will be increased while you using this barrel while is an essential feature for sniper rifles.

My experience with kar98k warzone

Being assertive is not enough to be the winner in the Verdansk. You should be quicker than the enemies to eliminate them.

In sniper battles, Aim down sight speed is an essential factor, and fortunately, this kar98  setup has a unique aim down sight speed. While you are using a sniper, it’s vital to shoot the next bullet asap, but you should first pull the gun; this gun also has fantastic speed in this part and reloading. It is like a sniper, but I should say some times after breaking enemies armors, it will need two other bullets to eliminate an enemy. This is annoying sometimes. And this was the only weak point which I felt while I was using this excellent marksman rifle.

Taking more minor damage from explosives and fires while you are a sniper player is essential. It helps you to more straightforward deal with the rusher players who try to surprise you.

Cold-blooded perk is incredible too. Because it will make you hidden in thermal optics and Al targeting systems.

Overkill allows you to select two guns and have a secondary weapon for near conflicts, but you should prepare a ghost loadout and peak when you found the second loadout.

The high alert will highlight every side of the monitor that the enemy is aiming at you, and you can save your life by running from the enemy’s aim before they shooting at you.

Both of these perks will help you in close-range battles and Surprise attacks.  Select them as you wish, but I suggest Amped; it will be more helpful.

Lethal : C4 or proximity mine or claymore

I think almost every gun in sniper class will be a suitable replacement for this gun. Like HDR and pelington, but as I said, it will make you heavier, and then it’s hard to move and kill enemies, no matter they are far or close. But if you are looking for a gun with almost the same features, I recommend Swiss k31. This gun even is better than kar98 in some ways.