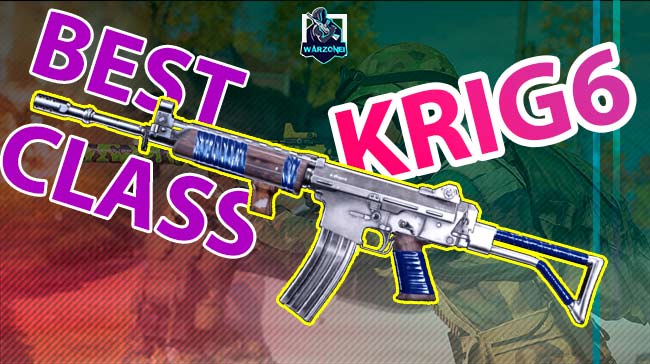 Today I have a rapid=fire assault rifle here. I prepared this article to find the way to get the most out of the Krig6 in the warzone.

Many of the BOCW guns tried to be popular since they found their way into the Verdansk. But just a number of them succeed and reach popularity. Krig6 is one of those guns that experienced so many buffs from the second season and finally became a beloved gun in the fourth season, and Krig6, fortunately, finds himself among the Meta guns.

Actually, all of us saw this gun performance in streams or on the battlefield, or at least we heard the krig6 great function. You can even find the Epic and legendary type of Krig6 in-ground loots and try that to experience its tremendous firepower.

I think it’s enough for producing this killing machine, and better to start with the krig6 warzone loadout and then speak more about its unique features.

This setup has the most negligible recoil. Like a piece of cake, it will kill enemies in long ranges even.

Excellent for long ranges setups .because of increasing essential features for such battles like damage, range, accuracy, bullet velocity, and effective damage range. It would also reduce the vertical recoil.

This barrel combining with the Agency suppressor would make the Krig6 zero recoil with reduction recoil on both sides.

It also would increase the damage, effective damage range, and control. It gives you the most incredible damage and less reduction in mobility and Aims down sight speed.

Most amateur players just pay attention to the Reload quickness, and they even haven’t no idea about the Aim down Sight speed and its importance. We suggest this MAG because it has the least damaging effect on the Aim down sight, and on the other hand, it has the most minor difference in reloading time with the Quick kind mags.

It’s just a good scope that provides an acceptable zoom level. No other necessary change.

I am using this gun as my primary gun after the mid-season update. It has incredible TTK, thanks to its tremendous fire rate.

This gun’s firepower and range are fantastic and able you to hurt enemies from long ranges. This setup has zero recoils, and this feature also serves its long-range support. Good enough for mid and long ranges, but it’s not so suitable for close ranges. It’s not quick enough to challenge close enemies. But if you be fast enough, you can even deal with that because it has enough firepower and fire rate to defeat an SMG gun.

You are using this gun, so you are playing as a rusher player role. The most crucial factor for you is quickness. This perk increases the tactical sprint time and crouches moving speed, which is helpful while you want to surprise enemies without making the walking sound.

The quick fix is also a helpful perk; while you kill an enemy, your health will be recovered, and you be ready to engage with the enemy’s teammates.

Perk2: overkill then ghost/overkill, then restock

Overkill is the most helpful perk in Verdansk. Without any doubt, you need a fast weapon for rushing, such as an SMG gun, and the overkill perk makes you able to carry two weapons. But after that, with the second loadout, you can peak ghost perk to hide from enemy sensors and UAVs.

Your second choice is the Restock. It is helpful if you are using stun grenades. It recharges your lethal and tactical over 50 seconds.

Switching your guns quickly has importance. Especially for rusher players, they switching their weapons many times every round, so changing speed has such a reputation that using Amped perk now makes sense.

If I want to name This kind of weapon which supports long ranges and on the other hand they have good mobility, it is not difficult now. For instance, C58, Grau, and m13 that all of them are among meta guns now. Also, if you need guns with the most negligible recoil and astonishing fire rate, like the Krig6, I can name Kilo 141.

What is the best setup for the Krig 6?

We prepared the best setup of Krig6, that many streamers and YouTubers also introduced that. That setup has the most negligible recoil and best choice for long-range battles.

Is that a question?! Seriously? No, it's not just a good gun; it's incredible, bro. It's a meta gun, and it has almost every feature you expect from an assault rifle. And not just that, it also has excellent mobility and aim down sight speed. All in All, it's perfect use that before the Raven nerfs this gun.