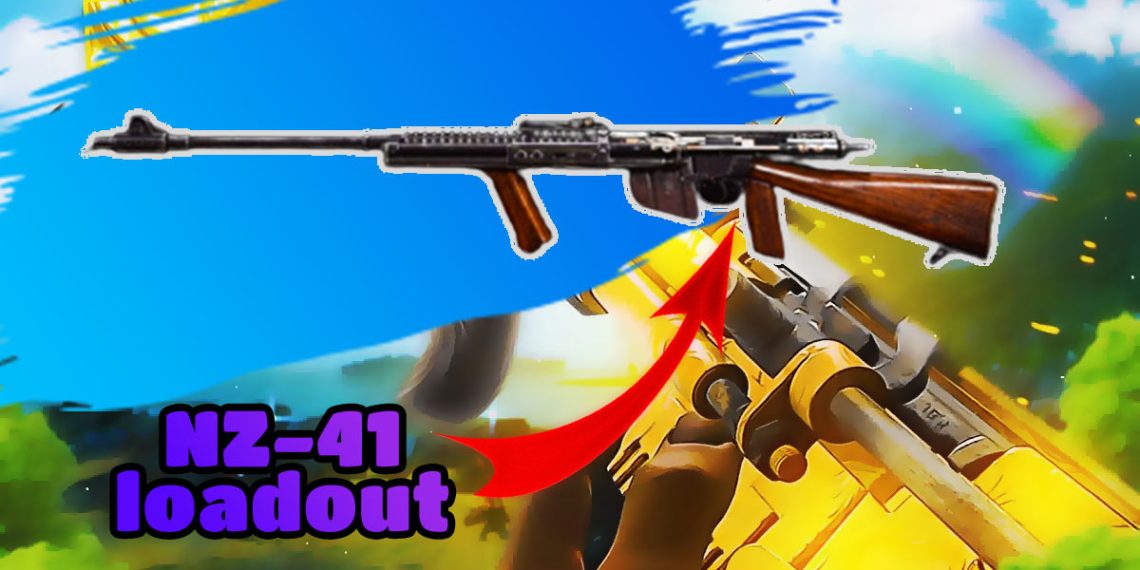 Assault rifles were always popular because of their excellent features; WW2 rifles that vanguard brings to Warzone are also good enough to have a place in your hands. NZ-41 is one of these rifles with unique features that make the NZ-41 good for every kind of battle, whether in a long rage battle or close range. So because of that, we prepared the best NZ-41 loadout for you here.

Assault rifles are powerful enough to eliminate one enemy with less than a complete Mag. Besides, these weapons have a high Fire rate that is also important for every fight. So naturally, these weapons have become popular day by day in Warzone or any other action game. NZ-41 is one Warzone rifle that finds its way into the Vanguard and Warzone from ww2.

This Weapon would be unlocked after reaching level 41 in Warzone, and next then you can upgrade and unlock its attachments. But after that, you will face many attachments that would confuse you while selecting among them. So if you looking for the best attachments of Nz-41 in Warzone, here we prepared the best Warzone NZ-41 setup.

this muzzle has a massive effect on the weapon’s control, and also it would suppress the gun.

This barrel would improve the gun Accuracy and increase the weapon control that makes the job more accessible; it also would reduce Scop Sway and Gun Bob.

This attachment would serve to recoil reduction alongside increasing hip-fire accuracy in this weapon that would not be used too much.

this stock would reduce weapon recoil, especially while you mounted the weapon or crouching in cost of a bit of mobility reduction.

is an optional item, but this optic has an appropriate zoom level.

This mag contains lighter bullets that cause increasing movement speed, Aim down sight speed, and mobility. It also would improve weapon accuracy and fire rate alongside recoil reduction. This Mag is really insane.

naturally, this weapon would work better as your primary weapon alongside an SMG or shotgun for engaging with enemies in at least 10m away distance. I don’t mean that you can’t use this rifle alongside a Sniper; it’s good in both ways because of its high fire rate and good mobility. But thanks to its high fire range and firepower, it would work better as your primary weapon. Another feature of this weapon is its low TTK, which is helpful when facing more than one enemy.

indeed you can feel the lack of Ammunition while using Vanguard weapons because of their high Mag capacities. So this perk would make the job easier; your ammo would resupply while passing from dead bodies.

less time for replacing your body armor and save plates with this perk that lets you have the same Armor health but with just 2 armor.

in most articles, I suggest this perk because it is really worth it; faster weapon swap is really useful in crowded maps such as Rebirth island or Pacific Caldera.

NA-41 is fantastic, but if you need more time to unlock the weapon or attachments and want to try other weapons, Bren is a good choice that is heavier than NZ-41, but it’s a powerful weapon. STG44 and Automaton also are popular weapons, and it’s also useful in Pacific Caldera. among the BOCW weapons, XM4 and AK47 can play a similar role as NZ-41.

What are the NZ-41 best attachments?

Nz-41 is one of the WWII assault rifles that find its way into the Warzone through the Vanguard. This gun really became popular thanks to its great damage and really low TTK. NZ-41 is not good, but it's indeed awesome, and all is because of this weapon's unique features. Zero recoil, great damage, high fire rate, and good mobility make this weapon really one of the best warzone rifles.