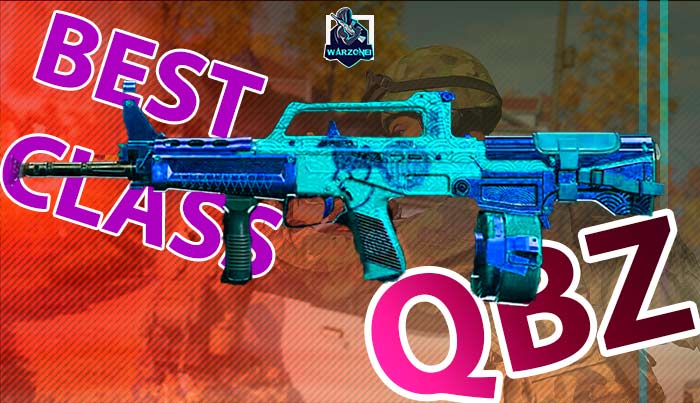 In the Pacific, you can choose from a variety of weapons, but we will introduce you to the best QBZ-83 loadout for warzone. Such as the MP5(BOCW) was a useless SMG, but nowadays, it is the most popular SMG in the pacific caldera.

The previous update (mid-season update) made so many changes, and again raven tries to retire Meta guns and make some changes to forgotten guns. Now tide turned, and discarded guns now become more popular day by day, and they now trying their chance to take the last Meta gun’s place.

Now, if you still didn’t know changes have been made about the guns, you can read THE MID-SEASON BUFF AND NERF to be aware of gun changes and found out their weaknesses and strengths.

Let me produce the QBZ Best loadout since the QBZ has experienced some changes, and now this gun is the FFAR1 replacement. Actually, it’s one of the best guns which you can use alongside a sniper because of some reasons, which I will explain in the following.

QBZ-83 can be your winning weapon if you have a strong class.
You can use the latest QBZ-83 class in the Pacific to win Call of Duty: Warzone. Because this attachment does not recoil, it gives you the ability to target your enemies.

It will bring bullet velocity and increase in range, damage and accuracy. Also, it would reduce the vertical recoil, which helps you to hurt enemies in mid-range without missing shots.

While you combine that with the Agency suppressor, they would complete each other. The muzzle will reduce the vertical recoil, and the barrel would reduce the horizontal recoil. And both of them serve to improve the damage and range of your gun.

This muzzle and barrel would make your gun more effective for mid-ranges.

It also would reduce both the vertical and horizontal recoil of your gun. This attachment also would help gun control.

It has a good capacity for Enough bullets as this high fire rate. Also, it will reduce lesser Aim Down Sight Speed than other Mags.

This gun doesn’t need any optics as this gun has a thin body and handsome iron sight, so we can select the SAS Stock to increase gun mobility, Firing move speed, Aiming walking movement speed, and ADS firing move speed. All those features are essential for and secondary gun, which may use for close conflicts.

In the video above, JGOD also introduces you to one of the top players of this weapon (QBZ-83) that shoots no-recoil.

QBZ loadout in the pacific 2022

The most incredible thing about this gun that attracts me was its extraordinary mobility and movement firing speed. It helps you to at the same time hurt the enemy and sidestep his shots.

Awesome TTK, thanks to the significant damage and high fire rate that make it a killer machine. Now imagine those features besides a fast AIM down sight. No one even can’t thinks about challenging you in close and mid ranges. This is the best secondary gun for sniper, which I saw. in a word QBZ is all that.

Best perks to use with Warzone QBZ class

This gun has incredible mobility, so you don’t need to use the double time perk; also, you can do SLIDE CANCEL, and if you don’t know how to do it correctly, you can learn it from our SLIDE CANCEL ARTICLE.

So you can use the EOD perk to take reduced damage from explosives, fire, and all other lethal. It is so functional while you use a sniper and makes you more challenging against surprising attacks or explosives damage while you are down.

You need to use QBZ as the secondary gun with your sniper, so you should use overkill perk. But while you carry a sniper, you should hide from the enemy sensor and UAV, so then ASAP, you should find the second loadout and peak the ghost perk.

If you asked me this question last week, I just name the XM4 and AK-47(BOCW), but they are not the meta guns yet. I don’t mean that they are not good, they are still two of the best guns in the Verdansk, yet they have excellent features. But if you want to use meta guns instead of QBZ, I can suggest GRUA, M13. They are fantastic also.

Is QBZ-83 good in the warzone?

It is not just good. It is all that a sniper player expects from a secondary gun. But if you ask me why? I can explain that with proof. Its incredible mobility makes you fast in running, battles, and even firing. This mobility brings astonishing firing move speed and Great Aim down sight to you, making you the winner in close-range fighting. Its significant damage and fantastic fire rate will make you enjoy an awesome TTK that the enemies would be shocked from. A thin body and lovely iron sight make that truly Needless from any optic. Its low recoil lets you effortlessly kill enemies even in mid and long ranges. Also, it’s AIM DOWN SIGHT SPEED, MOVEMENT SPEED, and firing movement speed; no need to talk. Is that enough, or do you need something more potent than this beast?